What is the Best Folding Bike Helmet?

I have got the great Brompton folding bike for driving here and there and it packs up nice and small. However, I’ve got this big, clunking helmet that I am carrying with me into this small cafe. Are there any alternatives? Yes, there is a folding bike helmet!

So, I’ve got to ask “What is the Best Folding Bike Helmet?” The best folding bicycle helmet should meet safety standards and be able to be folded up and put in a small bag or space for convenience. In that respect, the Morpher does the best job. Let’s take a look at how they came into existence and the top brands that are currently available.

The first helmet or head protective gear appeared to be what was called the hairnet. It is a ring of leather around the head with roles of leather interspersed from the front to the back. Due to the design and material this could be easily folded; however, I really do not think the riders had this in mind when they made it.

Prior to 1974 there were no helmets specifically designed with bikes in mind. People would use other safety helmets, like hockey helmets or mountaineering helmets. The first biking helmet was designed by Bell and it was called the Bell Biker. After that the first helmet designs had thick shells to help prevent the helmet from being penetrated by sharp objects and curbs.

In the late 1980s to early 1990s the no-shell helmet was used. It passed the standards at the time but was prone to breaking and splitting upon impact. There was also concern about it not having a hard smooth surface that could cause more harm than good from neck or brain injuries.

From then until today most helmets are made with a thin shell. This alleviates the problem of the helmet not having a smooth surface and keeps the helmet light.

In 1997, Motorika Ltd. filed a patent for their Motorika Snapit folding helmet. This was one of the first bike folding helmets that met United States CPSC (Consumer Product Safety Commission) standards. The helmet reduced its size by collapsing in half the clam-shell shapes. Helmet sales for the company were not successful and in a few years went out of business.

Around 2012 folding bike helmets reappeared in the market. They came in different sizes, shapes, and designs. Some are certified in the United States while others are only certified in their respective country but not in the US under the CPSC standard. One of the biggest advantages of having the US CSPC certification is selling the folding bicycle helmets on an online store like Amazon or in other brick and mortar stores like Walmart or Target.

Currently, it is small companies and crowdfunded companies that are producing folding bike helmets. The big companies like Bell, Giro, and Lazer do not have foldable biking helmets and when looking at their websites they all seem to have very similar designs. I would not be surprised to find out that there is testing being done in the background while they are waiting to see how big of a market there will be for folding bike helmets.

Jeff Woolf had a serious bicycle accident before folding helmets were a thing. One of his concerns was that a lot of commuters were not wearing helmets. The fact the helmets at the time were big and bulky made it an obstacle for the everyday commuter to carry one around if they decided to rent a bike to get back and forth on some days. So, Jeff being an inventor and innovation specialists knew there had to be a way to come up with a helmet that could be safe and easier to carry. His foldable helmet kickstarter through Indiegogo was a huge success and the Morpher foldable helmet was born.

The Pango almost looks like a helmet out of a science fiction movie. What’s nice about it is that it folds by 50% of its original size. The bad thing is it is one of the heaviest of the foldable helmets, even being heavier than a new non-folding helmet. The other area of concern is that it does not currently meet the US CPSC standard.
Weight: 515 grams
Dimensions (L x W x H): 23.0 x 18.5 x 13.0 cm

When I first saw this helmet it reminded me of the rings of Saturn when folded. It goes from five inches tall to just under two and a half inches when folded. I think the other thing that sets this folding helmet apart from the others is that it is designed with style in mind for the wearer. One more feature I have not seen in the other helmets is an NFC (near field communication) button on top of the helmet. This allows the rider to make an emergency call at the tap of their helmet with their smartphone. So, if you want to wear a folding helmet in style this may be the helmet for you.
Weight: 313 grams
Dimensions (L x W x H): 27.3 x 20.8 x 6.7 cm 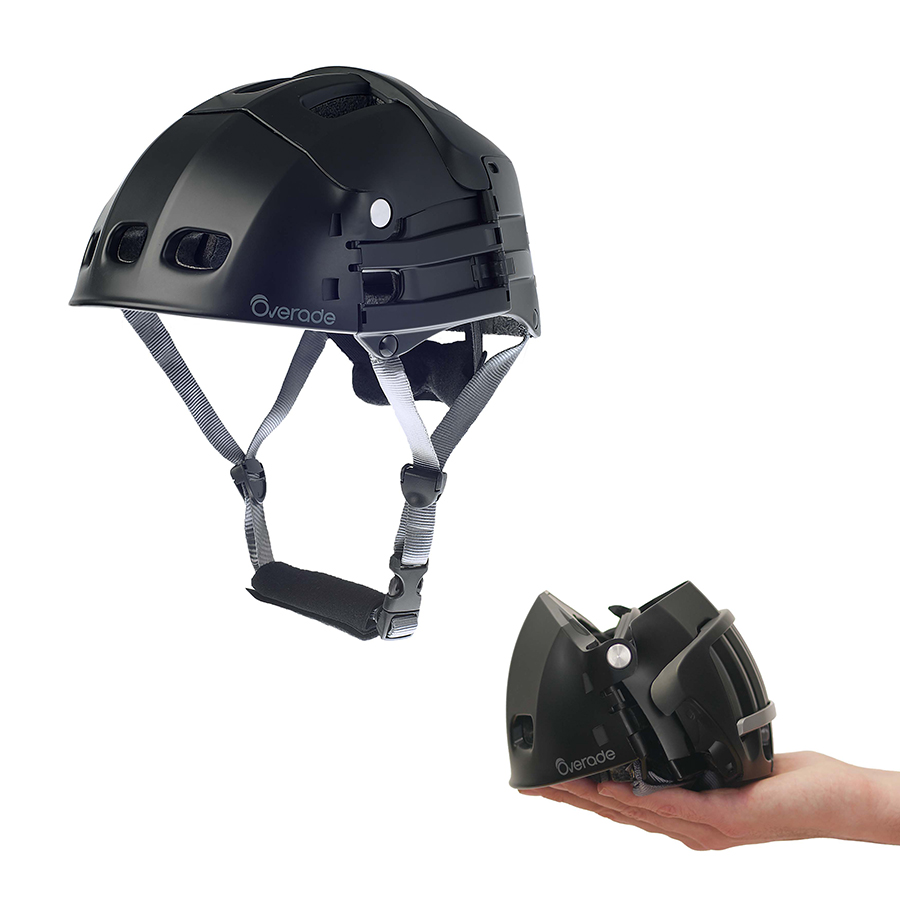 The Overade Plixi looks like a modular helmet when worn. It folds to 30% its unfolded size. Its unique folding design does not allow it to be flat like the Morpher but does reduce the size well enough to take up less space in a bag or backpack. Although, the Overade Plixi is one of the only foldable helmets in the 2016 Consumer Reports edition it did not score well, overall.
Weight: S-M helmets 450 grams and L-XL helmets are 500 grams.
Dimensions (L x W x H): 20.5 x 16.5 x 11.5 cm

The Carrera reminds me of an accordion only it only reduces its size by about one third. The advantage of this folding style is that it more easily fits more than one size of head. The disadvantage is that it does not fold as small as its competition in the folding helmet market.
Weight: 331 grams
Dimensions (L x W x H): 26.0 x 15.0 x 15.0 cm

Well, we have looked at a number of folding bike helmets and there seems to be one that will fit your own personal needs. It could be the Morpher that is a nice slender shape when folded, the Closca for those fashion-minded folks, the Overade Plixi that fits well in a bag or backpack, or the Carrera that might be a better fit than the others due to its folding design.

What is the best collapsible bike helmet for you?

Here are the results of a search on folding bike helmet Amazon.

2 Comments on What is the Best Folding Bike Helmet?

Hi! I'm Les Waller, I bought a Brompton Folding Bike in September 2018. I live in Germany and want to share my experiences and knowledge as I learn about riding this folding bicycle around Germany and the surrounding countries.